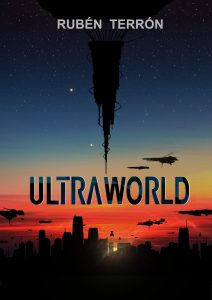 Ultraworld is a science fiction novel with a complete original soundtrack that will lead you through its pages from the beginning to the end.

After World War III, a cataclysm in the form of a universal deluge began to flood the cities of planet Earth. The self-proclaimed Emperor Caelus had succeeded in capturing and placing in Earth’s orbit a large asteroid from which Ultraworld now hangs suspended.

To those who followed his path, he gave the name Suprahumans, and inside them he implanted a neuroprocessor connecting their brains to the Mother quantum system. But the ambitious emperor wanted to go further, and set in motion the creation of a new species that he would name ultranoids, a hybrid between the human created with biotechnology and the most advanced robotics. Once its development was completed, humans would be replaced.

Beneath the floating city of Ultraworld are the sewers, where an organized group of rebels is trying to overthrow the Emperor and put an end to so much injustice. There is a legend in the sewers that says that one day someone will come down from heaven and return to earth all the freedom and love now lost in time.

In the OST you will listen to themes of electronic synth-Pop music, and experimental electronics, which will lead you through  its action scenes.

It will also surround us with sound atmospheres from the places being explored, as if it were a cinematographic work, accompanying the plot with other songs from the ambient genre.